Features of the most popular sports breed Hanover (part 2) 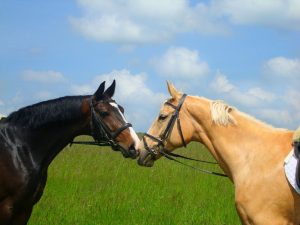 Description
Outwardly, the Hannover horses have an almost perfect exterior. These are true horse athletes. The features of the English individuals are clearly visible in the breed, with a good combination of the power and strength of taken and Holstein. Animals have a large body, strong limbs and well-developed muscles. It is distinguished from other Hanoverians by its characteristic hornbeam profile. Two heads of horses of the Hanover breed

The horses have a medium-sized head and a muscular neck with a graceful curve. The shoulders are slightly slanting and long, and the chest is developed so that the horses easily jump even over high barriers. Hanoverian horses have a powerful back, hips and croup, which during the jump allows them to make a powerful push.

The body of the animals should fit into the rectangle, that is, be elongated. The growth of individuals is average – about 166 cm, weight 550 kg. The limbs are strong and high, the hooves are solid, of the correct form. The Hanoverian breed of horses usually has a dark color (black or bay). Only occasionally can one meet karaka or ginger animals.

In addition to the ideal exterior, the horses are, according to reviews, a good character. Animals are very disciplined, ambitious and hardworking. In sport, their energy, ease of lifting is important. Elegance and beautiful movements allowed the Hanoverians to become the best breed for dressage. In Olympic sports, horses are considered the best by characteristics. A woman rides a horse of the Hanover breed

Features
The modern Hanoverian is more refined and lighter than its ancestors. Animals have a good temperament. Like other German horses, the Hanoverians are licensed only after veterinary certification. After that, it is necessary to pass the riding tests.

When choosing a pet, it is important to pay attention to several features. Stallions of the Hanover breed must have pronounced male behavior, and females – female.

The case should fit into a rectangle. It is desirable that the horse has expressive eyes and a noble head with a perfectly set neck. Attention should be paid to the grandmothers of four legs and hooves.

The gait of thoroughbred Hanoverians is smooth, all limbs move straight, without deceleration, acceleration or waddling. The beat is tracked from the back and shifts backward. Leg movements are light and energetic. A good Hanoverian horse has a step with a wide capture of space. The freedom of movement of the shoulders, hind legs and flexibility of the back is important. The Hannover horse in competitions

Individuals of the Hanoverian breed of horses undergo strict control during selection. Breeding stallions must pass a 100-day performance test, and 1/5 of the test is an assessment of temperament and desire to work. The character and reliability of animals is appreciated as well as the exterior and smoothness of movement. Evaluation of the Hanoverians is based on temperament, endurance, correct movements and jump. Also, only individuals with a balanced character are allowed to breed.

Speaking of the breed, one cannot fail to mention their sporting successes. The Hanover came to fame a century ago, when a horse named Pepita won almost 10,000 Reichsmarks and was considered the best among German triathlon horses. The Draufanger stallion in 1928 brought Olympic dressage gold to his country. The Hanoverians were seriously forced to talk about themselves after the 1964 Olympics, when the German team won gold again. These achievements continue to this day, and the horses have made famous all over the world several professional jockeys.