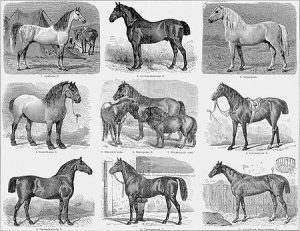 The Oldenburg breed is one of the oldest warm-blooded horse breeds that arose in the 17th century in a small German county (Oldenburg province, East Frisia). Named in honor of its founder, Count Anton Gunter von Oldenburg (1603-1667), who was passionately fond of horse breeding. His horse breeder subsequently became the best in Germany. And no wonder. Many factors contributed to this: a mild marine climate, spacious pastures rich in greenery, and also close proximity to Holland, which has long been famous for its ancient traditions of horse breeding. The Oldenburg horse at the beginning of its evolutionary development looked like a harnessed one, with a high-ranking gait (for the convenience of a collar), with movable wrists and shoulders. Then over the years, the appearance of the horse changed. German horse breeders always quickly adapted to the ever-changing demands on horses. However, it was not so much a quick change of orientation that made the Oldenburg horses popular, but rather the high quality standards for horses. For example, throughout the 17th century, the Oldenburg horse acted as a baroque-style horse. As the carriages were superseded by cars, the blood of purebred riding English breeds poured into the blood of the Oldenburg horses. A century later, they turned into light crew, and at the beginning of the 20th century they regained their powerful working qualities, becoming heavy horses for transporting mail and army needs. To date, the situation has changed a lot. Now the Oldenburg horse is one of the best riding breeds, which is very popular in equestrian sports.

In order for you to better imagine the image of the Oldenburg horse, we will give it a detailed description. From the Frisian ancestors, the Oldenburg horses inherited a powerful, strong, muscular physique, a long body; massive legs with a large hoof. A peculiar highlight of the appearance of the Oldenburg harness horses was a humpback profile. Cats typical for horses of this breed are black, bay, red, sometimes even gray. In general, the exterior of the Oldenburg horse is graceful and sporty. Has a brave character and a mild temperament.

Today, the main goal of the Oldenburg horse breeders is to create a perfectly built, unpretentious, noble, elegant, graceful horse that could be used in a variety of equestrian sports.