The history of origin and features of Bashkir horses 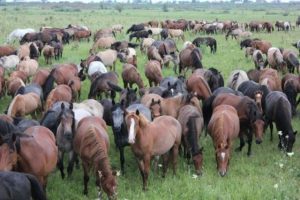 The Bashkir horse breed was known in antiquity by numerous descriptions. It occurred, as it is believed, from the crossing of forest north horses brought from Asia steppes. The breed is interesting in that it is close to the tarps – wild horses, now completely exterminated.

The tarpans were small in size, with a furry suit. Bashkir horses are often savras or salty, but otherwise very similar to extinct ancestors. Initially, they were grown by Bashkirs on their territory, hence the name of the breed. Bashkiria is characterized by sharp differences in soil, climate and vegetation. The horses brought down during the resettlement by the Bashkirs had to adapt to new living conditions. The formation of the breed was also influenced by local horses and those that came here later. The development of mining and tillage in the Southern Urals required a horse accustomed to working in harnesses, especially on postal tracts and carts. At the same time, the military interests of the Russian Empire made demands for horses suitable for saddles, for Cossack and Bashkir troops.

Thanks to such diverse factors, the Bashkir horse breed combined the features of the forest and steppe directions, both for economic purposes and for breeding. It did not remain completely herded, since the Bashkirs had long lived in villages and only in the summer lived on pastures with cattle and herds of horses. In cold mountain-forest areas, where it was impossible to keep herds due to snow, hay was stocked for animals. And in the south, horses could live on pasture all year round. To date, thanks to work on the “Bashkirs” and the right diet, an improved breed has formed. It is characterized by tirelessness, strength and endurance with relatively small growth.

Horses of the Bashkir variety

Description
Bashkir horses are small, reaching no more than 145 cm at the withers. Moreover, their body is wide and bony. The head of the animals is medium in size, a little rough. The neck is fleshy, medium length and straight. The back is also straight and wide. The lumbar of horses is strong, long, fits perfectly under the saddle. The croup of horses is round, flat and short. The chest is deep and wide.

Like many northern breeds, the mane, bangs and tail are very thick. Legs are short, bony and dry. In general, the constitution of horses is very strong. Outwardly, animals look very attractive, as you can see in the photo and video. The oblique body length of the stallions is up to 150 cm, the circumference of the metacarpus is up to 19.5 cm, the circumference of the chest is up to 175 cm. The live weight of the males is up to 470 kg. Mares are slightly smaller in all respects. In the Bashkir breed of horses, the color, as a rule, is red, bay, bulan or savras.

The Bashkirs have several unique features. For example, this is one of the few breeds that does not cause an allergic reaction in people who are allergic to horses. In addition, mares of the Bashkir breed are unusual in that they are used for milk production. According to statistics, most horses produce more than 2000 liters of product per year. Fermented alcoholic beverage sold in many regions, koumiss, is traditionally prepared from it. Thanks to the innate stamina and strength, horses can live in the open air even in frosts up to -30 degrees. Animals are capable of breaking deep snow in search of food and can even tolerate severe snowstorms. The hooves are very hard, often owners work with pets without horseshoes.

Content Features
The Bashkir breed of horses is quite unpretentious in content and in food. This is one of the most profitable breeds for breeding. Almost all year round, animals are able to live in the open air and eat pasture. Like tarps, horses rake snow in search of grass. Only during heavy snowfall it is necessary to provide pets with pre-prepared food and stable. To the cold, they grow a long thick coat. Unlike other horses, it is not necessary to clean it.

Bashkir horses in the meadow

On winter pastures for “Bashkirs” they put dams – covered premises into which animals can enter if necessary. Hay must also be prepared on pastures. The nature of the animals is semi-wild. They are not afraid of long distances and roads.

Herds, as a rule, are divided into several parts – in each mare with young animals and one leader. The stallion protects its wards not only from rivals, but also from any predators. Often even at the cost of his life. When a herd of a Bashkir variety is found in a herd of another breed, animals can be safely left under the supervision of a leader. “Bashkirets” will not allow the herd to disperse and go far, and also will not let anyone else, except for a few familiar breeders.

Using
Usually Bashkir horses are used for transportation of goods and agricultural work. In Bashkiria, horse meat is traditionally present in the diet – meat in animals with excellent taste. It is dried, sent to the production of sausages, or simply cooked in the kitchen. In addition, due to high milk yield and long periods of lactation (up to 8 months), mare’s milk is an inherent benefit of the “Bashkirs”. Also, horses can often be found in circus performances.

Horse of the Bashkir variety

Before buying a Bashkir horse, you must immediately determine what purpose it will be used. If the animal is required for work in agriculture and for the transport of goods, it is recommended to buy a stallion. Males in this breed are very hardy and can do almost any job.

Both stallions and mares are equally suitable for horse riding. They jump briskly and over long distances.

For milk, of course, you need a mare. Ask in advance what productivity she has. If you are buying a female foal, find out how much milk the mother gave per year. Milk productivity ranges from 1,500 to 2,000 liters per year. It is worth noting that if the “Bashkir” is used in hard work, top dressing needs top dressing. Additional high-quality food will give the animal strength after a long transportation or ride.