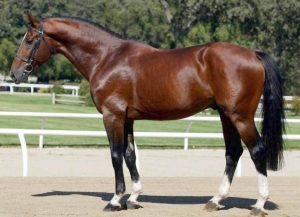 This wonderful breed of horses can rightfully be proud of its rather long history. Once such horses were indispensable for riders during the war, because the courage and balanced nature of these amazing animals were highly valued. Currently, bright representatives of the breed are used only as sports horses.

The Holstein breed of horses can be safely called the oldest among all German half-breeds, because it has been mentioned in the literature for several centuries. For example, in the distant 17th century, horses that were bred in this area were very popular among residents of Italy, France, Denmark. In the veins of an old horse – a representative of the Holstein family – the blood of Spanish, German, Neapolitan, Eastern horses flowed. A little later, in the 19th century, geneticists began to cross such horses with the Yorkshire carriages, as a result of which the Holstein horse had not only a special carriage move, but also a magnificent tread.

But not only these beautiful courageous horses were famous for the use for carriages in those years, they began to be widely used for the needs of cavalry. Historians consider the Traventall stud farm to be the site of the Holstein horse, which began its work in 1867, and today the center located in Elmshorn, Germany, has become the breeding ground for horses of this breed. To get the type of a sports horse that we have the opportunity to observe today, scientists crossed with a thoroughbred horse, the result of which was the appearance of a horse with an excellent tilt of the blades and low speed.

Currently, the best representatives of this sporting breed occupy the highest places on the podium of competitions around the world and bring Olympic gold of honor to their country. For example, it is worth mentioning here a bay stallion known in certain circles by the name of Meteor, who has already managed to get three Olympic gold medals. At the Olympics, which was held in 1952, this beautiful horse received a well-deserved bronze medal, and four years later he helped his team win gold in the overall standings, and his personal achievement was fourth.

The year 1960 brought the German team the second Olympic highest award, which again became the meteor’s merit. Over the centuries, the breed has undergone qualitative changes more than once, it all depended on the areas of application of its representatives.

Modern representatives of the Holstein breed of horses are ideal riding horses that have a set of physical and moral qualities necessary for equestrian sport.

As can be seen in the photo and video, the exterior of the breed is quite interesting. The height of the modern representative of the breed is from 168 to 172 cm at the withers. Most often today you can meet horses of such stripes as black, gray, bay, dark bay. Such horses have an oblong head shape, mainly a straight profile, beautiful vibrant eyes, wide nostrils and very long ears. Their back is sloping, has many muscles, the neck is somewhat wide and curved, the tail is located quite high.

Such horses can boast of a wide chest, the correct setting of the limbs, their metacarpus is very proportionate, the joints are somewhat short, but quite developed. The description of the hooves matches the rest of the body of this magnificent steed – they are distinguished by a rounded shape and a dense horn. Horses of the Holstein breed are quite unique in type, have personal qualities and abilities inherent only to them. These wonderful horses are distinguished from others by a very balanced character, but the mobility of the animal does not suffer at all. Fine German sports horses are very efficient, hardy and reliable enough, which makes them today perfectly suitable for sports performances. Holstein is a fairly versatile breed that has excellent performance.

Nowadays, excellent horses from Germany are commonly used in equestrian sports. If we talk about the last twenty years, it should be emphasized that the representatives of this breed invariably occupy the highest places in all Olympic disciplines. Many stallions have already become very popular among fans of this sport. Many horses can boast not only their own achievements, but also awards of the highest standard, which their children won in tournaments.

In jumping and jumping, almost always in competitions there are no equal to German stallions. For example, a horse named Landgraf is famous for being the father of many Olympic champions in equestrian sport. Another representative of the Holstein clan named Kaletto is a relative of as many as seven of the best stallions, who over the years of performances bring their team many awards. As you can see, the Germans managed to bring out a beautiful breed of sports riding horse, which became a model of speed, strength and a symbol of victory.