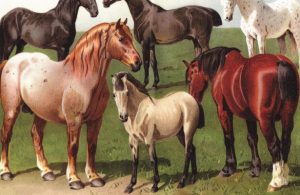 Using cutting-edge DNA research methods, an international research team of archaeologists, geneticists and evolutionary biologists from 85 scientific institutions around the world has collected genomic data that spans the last 42,000 years of horse development and has tracked the contribution of various genetic lines to the formation of modern breeds. horses. The results of the work can be found on the pages of the journal Cell, research supported by a grant from the Russian Science Foundation.
People tamed a horse about 5.5 thousand years ago, after dogs, cattle and pigs. From the moment they learned to ride, milk horses and control their reproduction, the history of mankind has radically changed. The ways of traveling and developing new territories, transporting goods and conducting military operations have become different. Depending on the region and various needs, people selected animals according to different principles – this is how different breeds of modern domestic horses appeared.
To find out exactly which genetic groups were involved in creating the modern look of the horse, an international team of scientists reconstructed a complex system of selection and crosses. A huge part of the work was the collection of DNA samples of different horse lines from the remains stored in private and public collections around the world. The authors tracked changes in the genome of modern horses from the moment of domestication to the present, compared with ancestral breeds and evaluated their contribution.
Scientists have discovered previously unknown genetic lines of horses: one of them lived in Iberia about four thousand years ago, and the other in Siberia more than ten thousand years ago. However, they have contributed to the genome of modern horses around the world. The study shows that although today there are only two main lines (domestic horse and Przhevalsky horse), their diversity at the time of domestication was much greater.
The presented work shows that in the 7th – 9th centuries AD, a revolution took place in the history of European horses. The only breeds genetically close to the animals that inhabited the continent in the Iron Age and Gallo-Roman times, these days can only be found on the British Isles and in Iceland. In continental Europe, the descendants of another group of horses, descended from the Persian line and became the ancestor of most modern breeds, are now widespread. To understand what underlies the success of these horses, scientists conducted genetic research. It turned out that in the distant past, people selected animals according to the manifestation of certain traits characteristic of Persian lines. Due to this, genes responsible for specific traits were fixed in the genome. Most likely, the traits of Sassanian horses began to be appreciated after the Persian wars and Muslim expansion. In addition, the researchers found that in the last 1.5 thousand years, the most intensive selection was carried out for genes associated with running speed.
“The modern world gives a poor idea of ​​the diversity of life in the past. However, thanks to interdisciplinary research, including history, archeology and genetics, we can reconstruct the origin of modern domestic animals and plants. The data obtained allow us not only to imagine how the breeds looked in the past, but also to understand by what principles people crossed and selected their horses, ”summarizes the lead author of the study, Antoine Phages.