Breeds of horses for transportation of heavy cargo 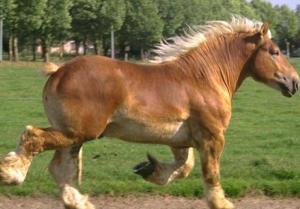 The breed of horses The Soviet heavy truck has a lot of advantages that are indispensable for animals, often called to perform heavy physical work. This beautiful horse is not only hardworking enough, but also gives a lot of healthy milk. Photo of a Soviet breed horse Genetics created this variety by crossing brabansons and draft horses. Bityugs, Percheron horses, Ardennes, and Suffolks also contributed to the creation of this breed. In the 19th century, Brabansons were brought to Russia, who perfectly suited for the role of working horses, but did not tolerate the country’s changing climate. Therefore, the specialists of the Pochinkovsk and Mordovian factories decided to create the Soviet variety of horses, which were officially recognized in 1952.

These beautiful horses do not require special conditions of detention, are flexible and have great physical strength. They come in several forms – basic, weighted, as well as lightweight.

Shire
Another heavy horse breed of horses can be called the heaviest horse on the planet. Shire is an English breed that comes from the famous war horses of knights. The weight of such an animal can reach 1225 kg, and the height at the withers – 185 cm. The horse of the English breed Shire

When King Henry sat on the throne, he adopted many laws in which he instructed to grow strong and stately horses. In the 18th century, such animals were involved in hard work in the agricultural industry. And a little earlier, in the 16th century, shires were used in military affairs. Shirov of those years was distinguished by a powerful physique and impressive growth, as well as beautiful fast movements. Such stallions can be of several stripes – black, bay, carack, gray and others.

Belgian Heavy Duty
In the Middle Ages, this heavy horse breed was still called Flanders. The modern Belgian horse is also called Brabancon – it came from a region in Belgium. This horse had a huge impact on the development of shires, Suffolk and Kledesdal stallions. The height of such a horse can be up to 172 cm at the withers. Distinguish between red – red, bay – roan, red and other colors. Belgian heavy horse on the site

The representatives of the horse breed have a heavy truck with powerful muscles, thanks to which they are able to remain operational for a long time. This is a breed of centenarians who have a calm disposition and are always ready to cooperate with a person. Brabancons have good health and are unpretentious in everyday life. Some experts call the Belgian draft horse somehow gypsy.

Australian
An Australian stallion also belongs to the breed of horses of heavy trucks. It was obtained by crossing four horse breeds by geneticists and inherited their best qualities. Such a horse can only be monophonic, only white color on the limbs is allowed. The character of this heavy truck is good-natured, flexible, he is well developed physically.

Such a horse has beautiful fast movements and stride length. Its best specimens take part in plowing competitions, as well as in harness and brood. With their help, many years ago they cultivated land in the village and built dams, used these horses to develop new territories. Today, representatives of the Australian heavy horse breed are used to transport logs in the forest, where they easily replace powerful equipment. In the photo below you can see a horse of this breed. A horse of the breed Australian Shepherd

Bityug
Unfortunately, this old Russian breed of heavy trucks did not survive, but once such stallions had a special honor in the villages, as they helped with the housework. They were brown and mousy suits, and in height reached 158 cm. Scientists managed to breed this kind of horses by crossing the famous Russian heavy trucks and trotters. To understand what a bright representative of this breed looked like, just look at the photo of the Russian heavy truck, which is presented above. Bityuga in the common people was also called a “draft horse”, which testifies to its great endurance and the ability to perform heavy types of work for a long time.

Vladimirsky
This Russian horse, which began to be bred on a large scale in 1935, has a height of about 165 cm and a weight of about 750 kg. It is quite massive, while maintaining smooth and elegant movements. There are such suits of Vladimir stallion as red, bay and black. He is a frequent visitor to various competitions, where he always shows high results. Horse of the breed Vladimir heavy truck

Such a heavy truck has excellent breeding performance, it is used to cover mares and is used to help people with the hardest draft work. Such an animal is easy to manage, well developed at an early age, and is also famous for its great fecundity. The shades of such horses range from golden to dark cherry in the bay color, and they have beautiful marks on the head and legs. Such a horse manages in life the minimum proposed conditions, and at the same time is ready to work day and night.