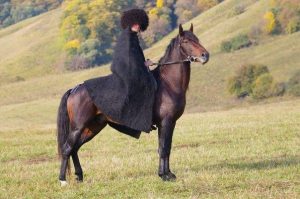 At the very beginning of our century, such horses were a living commodity that was exported not only to all areas of the Caucasus itself, but also far beyond its territory. In the period of the maximum flowering of horse breeding in this region after the difficult post-war years, work on improving the Karachai breed of horses became more focused. In 1930, the Karachaevsky stud farm appeared, and after research by livestock specialists, the Karachai representative of the breed, along with the Kabardian one, was placed in the first volume of the special State Bookbook, which contained information about mountain horses.

Unfortunately, the study and further improvement of the Karachai horse breed was suspended at a time when Karachai people were forcibly evicted from the territory of Central Asia. Many decades later, these beautiful horses were mistakenly ranked as Kabardian breed. And only in the eighties this mistake was corrected and the Karachai breed of horses again became an independent unit. In these mountain horses, male lines were laid, which the genetic scientists managed to maintain for today.

Working on the improvement of the breed, specialists often used the method of some kindred mating. This helped to consolidate the type and not lose the best qualities of the Karachai breed of horses.

One of the most powerful lines was the line of the stallion bearing the name Dausuz – his descendants received a strong physique and were distinguished by remarkable physical strength, as well as performance. Nowadays, such beautiful horses continue to be bred not only at the Karachaevsky stud farm, but also at many farms of Karachay-Cherkessia.

Characteristic
If we talk about what kind of horse breed looks like, then a lot of laudatory words can be said about it. The fact that this breed is designed specifically for mountainous areas leaves an imprint on the entire exterior and the main character traits of the horse. Having a height at the withers of about 150-155 centimeters, such horses are very wide-bodied. Such a horse is designed for work more than for use in a military environment. It is not as massive and short-footed as its similar Kabardian one. Describing the Karachai horses, it should be noted that their head is medium in size, their nose with a light hump, has thin walls, the ears are also of medium length and, as it were, slightly pointed, the neck does not differ in huge size, it is quite muscular, the presence of Adam’s apple is allowed. The back is very straight and long, the withers are not too high, the muscular lower back, the croup are slightly flat and very wide, the so-called false ribs are quite developed for the chest, the shoulder blades are somewhat straightforward, and also have an average length.

The black horse of the Karachay variety

If we talk about the setting of the front legs, then it is distinguished by sufficient breadth and small clubfoot, and the hind limbs can be somewhat saber-fenced (this is a feature not only of the Karachai horse breed, but also of almost all animal rocks). The hooves are characterized by the correct shape, they have a fairly strong horn, but the tail and mane are often wavy, and at the same time very long and thick. Individuals of this remarkable breed are of such stripes as dark bay, karaka, and black. If we talk about white spots, then on the body of such animals they practically do not exist.

The Karachaevskaya breed is represented by three types – high, characteristic and massive. Most of all other types correspond to the Karachai line representatives of the characteristic horse – harness warehouse. For mares of this type, the height at the withers is about 150 cm, the chest circumference is 183, the metacarpus is 19, 1, and the total body length is 156 centimeters. The horses of the riding type are tall and somewhat lightweight, they received a surge of blood from a real horse breed. The horses of massive type are distinguished by a wide body, they are stunted and muscular. All varieties of the Karachay breed are united by great fecundity.

Advantages
Noble representatives of the breed have a kind of beautiful exterior, are represented by different types, are distinguished by tremendous endurance and performance, they are quite versatile, and therefore are a frequent and favorite exhibit of many agricultural exhibitions. The representative of the beautiful line of the stallion Kobchik by the name of Cypress became the first champion of the All-Union Agricultural Exhibition. And the stallion with the formidable name Admiral, representing the line of the Arsenal, was recognized by experts as the standard of a riding horse intended for mountain-type trails.

Many honorable awards and titles were received at all kinds of exhibitions and competitions by beautiful Karachai horses. Anglo-Karachai horses showed excellent qualities for sports many times, winning triathlon competitions and overcoming all kinds of obstacles. This universal breed of horses is perfectly adapted to the conditions of herd keeping, its representatives are very unpretentious in everyday life and live quite a long time.

They have good plasticity, they have excellent health and high physical indicators, they undergo acclimatization without any problems in any natural and weather conditions. Such beautiful and hardy horses are used not only to perform various types of work in the mountains. They are also promising for mass equestrian sports, hunting and tourism, circus performances, service in the ranks of the valiant police and army.