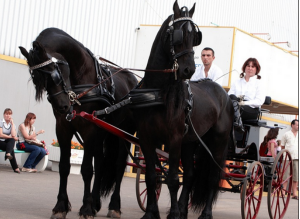 Breed history
The Friesian horse was bred in the Netherlands, or rather, in Friesland. The first mention of them dates back to the time of the ancient Roman emperor Caesar, who described them as horses of the then Germanic tribes.

Friesian horses in harness Today, experts believe that the ancestors of the Frisians are local heavy horse breeds, which were brought by the Celtic conquerors. According to data that has come down to us from the time of the Roman historian Tacitus, the first representatives of the breed were characterized as universal, strong, but not very attractive horses.

Thanks to selective selection, the descendants of those horses in the Middle Ages were able to be used for battle as military, large and heavy horses. There is evidence that it was on this breed that the European knights went on their crusades. During the campaigns to the east, these horses crossed with eastern species, which had a positive effect on the characteristics of animals.

According to historical documents and evidence that have come down to our time, it is known that the Friesian horse had a significant impact on English horse breeding, as animals were universally used for military purposes during campaigns and medieval wars.

After the collapse of the Roman Empire, there was a deeper penetration of the Frisians into Norway and England. Here, animals were used for breeding purposes to improve the characteristics of local horse varieties. As a result of this, today breeds such as the English Dale and Fell ponies and the Norwegian Goodbransdal in their characteristics resemble miniature friezes. It is also believed that the Friesian horse is included in the list of ancestors of the Shire breed. The Friesian horse grazes in the meadow

The times of Holland’s possession by Spain (16th century) played an important role in the formation of the breed. It was during this period that the Barbary and Andalusian horses were used in breeding. Thanks to the Andalusian influence, modern friezes got their greatness. Many horse breeders believe that crossing with these species led to the manifestation of gray color. This evidence is quite common in historical documents of the time.

In the same period, there is a decline in the popularity of friezes as war horses. This is explained simply – the loss of need for heavy knight cavalry, which was replaced by a light one, represented by Andalusian or Spanish animals. Therefore, more and more often the Friesian horse was used as a carriage.

During the Baroque period (17-18 centuries) these animals were actively bred at the royal courts. They were used as ceremonial horses of kings and nobles. But over time, when a wave of the overthrow of the monarchies swept through Europe, the Friesian horse also began to be used by the Dutch peasants.

In the 18-19 centuries, this species was particularly popular due to the excellent trotting speed at that time. Then the epithet “hardtrabers” was applied to outstanding trotters. Such trotters were used in breeding the following trotter breeds: American, Norfolk, and Oryol. The selection had the greatest impact on the latter. The Oryol breed inherited from the Frisians such exterior features as bony legs with prominent and large hooves, long brushes and large croup. At the same time, according to many experts, among the Oryol breed spread blacks precisely because of the friezes. It is also believed that these animals were used for breeding the Norfolk breed Shelza. A horse of the Friesian breed with a stallion

In the 19th century, the species lost most of its popularity and animals were mainly used by amateur athletes. During this period, horses were bred only by peasants who did not pursue special goals in the selection of certain characteristics. A decrease in the number of species was observed due to their displacement from racetracks and equestrian sports.

Therefore, at the end of the 19th century, a special society was created, called the Society of the Stud Book on Friesian Horses. His goal was to breed a small horse for agricultural purposes. But this could not stop the sharp decline in the number of purebred individuals that could not withstand competition with the then-popular working varieties. As a result, by 1913 only three purebred stallions remained in the world. Only Dutch farmers who crossed purebred animals with representatives of the Oldenburg breed could save the species from complete extinction.

The second crisis occurred in the 60s of the 20th century, when the number of Friesian mares was only 500 animals. After this, the friezes gained a “second wind” and today are considered one of the most popular types of horses used for breeding and equestrian sports.

Today, the popularity of the Frisians not only does not decrease, but also continues to gain momentum, thanks to the increased public interest in the horses of the Baroque period. Friezes actively perform in circus shows, participate in popular harness competitions in the West, etc.