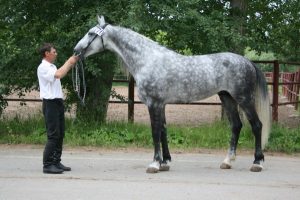 How did the breed
The first breeder of these horses, as mentioned above, was the notorious Count Alexei Orlov-Chesmensky. When he had already resigned, he began to devote all his time to breeding work. Starting from 1775, the count travels to the countries of Europe and Asia, acquiring horses of all kinds in them. In fact, the history of the Oryol trotters dates back to the distant 1776, when the count bought for a fantastic amount and brought back to his homeland a stallion with hot Arab blood flowing in his veins – Smetanka horse. Every horse lover can see a photo of this handsome man today and appreciate all his virtues.

In addition to him, Alex acquired many excellent Arabian horses from Turkey, Egypt and Arabia. The stallion Smetanka, unfortunately, did not live long in Russia. But for the year that he was at the count, he was able to leave numerous descendants after his premature departure. It was one mare and four stallions. One of the best heirs of Smetanka was rightfully considered the horse Polkan, who had the whole set of qualities necessary for breeding an ideal draft breed.

In order to add to all its obvious advantages also a steady move, Orlov crossed the mares brought from the Province of Friesland (in Holland) with Arab and Arab – Danish horses. The result of these crosses was excellent foals. The secret to the success of the horses Orlov bred was not only in successful breeding, but also in the methods of selection and special training of horses that he personally developed. All mares and stallions passed endurance tests without fail. In this case, a whip was used, which helped develop in animals the desire to run well at a trot.

After the death of the count in 1808, his factory went to Count Shishkin. He continued the glorious work of his predecessor, working on improving the breed, whose best representatives of those years can be seen in the photo.

Soon, representatives of the Oryol breed began to spread to all territories of Russia. It was thanks to them that trotting sport was born. Bright representatives of this variety of horses took prizes in almost all competitions. The stock of these individuals decreased significantly during the Civil War. Work on crossbreeding breeders were able to continue only in the 20s of the twentieth century. During this period, the first American trotters began to appear in Russia. They were also created specifically for participation and victories in sports races. Thanks to the photo, today you can get an idea of ​​what these horses looked like, which for a short time managed to squeeze Oryol trotters not only in the stables of horse connoisseurs of those years, but also in sports competitions.

But this temporary phenomenon of declining popularity of our horses was successfully overcome. Since, using a competent system of training and sporting events, specialists involved in improving the Oryol horses were able to continue to realize their rich potential. Thus, the wonderful representatives of the Oryol trotters, which we can see in the photo, again became deservedly popular in the then existing state called the Soviet Union.

After 15 years, stunning speed records of these horses were obtained, and their growth at the withers became larger. The Oryol trotters managed to regain not only honor and due respect, but also amaze their fans with high rates of frisky running.

To date, one of the main lines in this type of horses is the offspring of a stallion named Square. He not only became a true legend and a prize-winner of many exhibitions, but also was able to leave behind numerous offspring. About six hundred foals continued the great work begun by their parent and now they deservedly become the winners of the competitions and receive the highest awards.

After the collapse of the Soviet Union, the position of the trotters was not the best. But to help preserve and further breed these beautiful horses came their fans, who created the Association from representatives of the countries of Russia and the CIS. Specialists from France also made a great contribution to saving the breed. And already in 2007, the Ministry of Agriculture of Russia awarded the Oryol horse an honorary title of breed of Russian breeding.