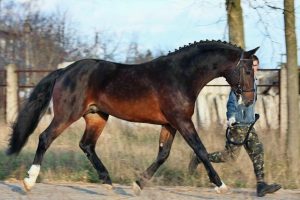 Prior to this, in Hanover there was a princely stable, where albino horses were taken out. According to sources, horses were bred specifically for princely carriages. However, these animals were of little use for the needs of the people and the army. Having a capricious disposition and being easily soiled, two hundred years later the white princely albinos disappeared, leaving only the image of a horse on the coat of arms of the city. Hannover breed horse while walking END_OF_DOCUMENT_TOKEN_TO_BE_REPLACED